New UP App for Smartphones, Smartwatches and Wearables 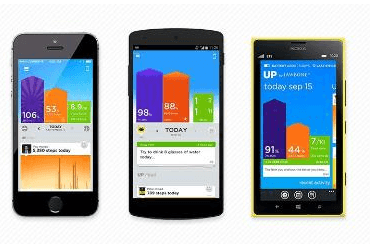 We covered Jawbone’s new plans for wearables and smart devices a couple of days ago. Jawbone has now announced a new UP app that allows anyone with a compatible smartphone, Android Wear device, Pebble, or an iPhone to join the UP community. Here is how it works:

It utilizes data from the M7 motion coprocessor via Apple’s Health app, SensorCore technology in Windows Phone and similar coprocessors in Android™ phones to give millions of smartphone owners free access to UP’s rich activity-tracking tools and intelligent coaching.

The device will be compatible with Android Wear devices, Pebble smartwatches, and any other device that connects with the Health app for iOS 8. Jawbone is also releasing an open framework, allowing manufacturers to build products that can communicate with the UP system using WiFi or Bluetooth. The UP app will be available on Android, Windows Phone and Pebble platforms later this month as a free download. The iOS version will be available when iOS 8 is released to everyone.

So you want to play chess games everywhere you go? Thanks to Emerald Chess, you can play chess on your...

HTC Vive Gets Repairability Score of 8 out of 10

Many of us can't wait to get our hands on a HTC Vive headset. Have you wondered how easily can...